The next festival I have on my plate is the Old Fourth Ward Arts Festival. I have no idea what to expect!

First, Old Fourth Ward is in an area where there are some artsy, trendy people, who should not be confused for the hobos which are also lurking about the area. Supposedly the area is getting “revitalized.” I’ve heard about the great restaurants in the area, the homeless people begging for money, the beautiful park, the homeless people begging for money, and the Masquerade (staging building for concerts which is “artistically” derelict) is practically a landmark.

Second, this is the first year this festival has ever happened. Will lots of people come to it because it is new and they are curious about seeing me and whatever other artists would set up in the area? I hope so.

Third, the weather. Sometimes the weather report tells me it will be raining and storming both days. Today it tells me it’ll rain some Saturday and then be pleasant Sunday, which is an improvement since there are no more pictures of lightening lurking around my weekend. Everyone knows that when it rains people aren’t so willing to hop out of their cars for an outdoor event and buy art and I can’t blame them.

I’m not sure what to think of this festival. I’ve kept my mind open and my expectations low. This is only my second year selling my work at festivals so I’m still learning about which ones to apply to and which ones I should do next year and perhaps which festivals aren’t great for my work. Fingers crossed for Old Fourth Ward. If anything, it’ll be interesting!

Look! A map I found on the website about the location. I will be booth #66. I think I have an AWESOME booth spot. (for a bigger map and more inf about the festival itself go to http://www.oldfourthwardparkartsfestival.com/ ) 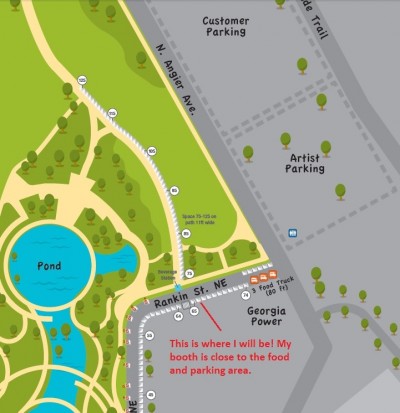