Random Stuff that Follows Me

I think my problem applies to all people who are artists or crafters of any kind– random stuff follows you.

By follow, I mean the stuff you don’t bring yourself to get rid of because it may just have a purpose at some point in in 80 years. Perhaps in sixty years you will need it and ah… what a shame, fourty years ago you got rid of it. What a waste.

It isn’t as though the expense of buying additional feathers will break my bank, but I’m pretty certain I don’t want to get rid of the random feathers I have. As an artist, crafter, or generally as anyone who “makes” things, you’ll find it easily justifible to have 500 bits of different colored ribbon, buttons, rocks… and whatever that other thing is that you put in a plastic bag five years ago.

This belief gets reinforced whenever it actually comes to fruition, which I would say is about 10-15% of the time. The example that I am thinking of is a small lantern I sort-of made for my mother. When I say “made” I use the term lightly because I had purchased a latern that already existed, I just added to it. My aunt wasn’t doing well, she was suffering from Lou Gehrig’s Disease at the time and she was the only sibling my mother had. When I was growing up I use to go to Seattle to visit her with the family. As kids (I am one of four), there wasn’t much to do because my aunt and her husband never had children. When we visited we always ended up going to the shore at Puget SOund because they lived right off of it. It isn’t like a beach at all, it’s incredibly rocky and the water was always hypotherma-cold. My mom liked the worn glass that would wash up on the beach so my sister and I would comb the beach, looking for colored glass for her or interesting worn stones. I hung onto some of that glass as I got older. Now that my aunt has passed away and the house is sold, I doubt I’ll ever go back to that beach. I took the glass we had collected and lined the inside of the lantern as much as I could with it (I had to get some other glass to fill in the holes). I gave the lantern to my mom– it does look beautiful when you light it up. In that instance… I was really glad that I hung onto the little pile of worn glass for fifteen years or so. 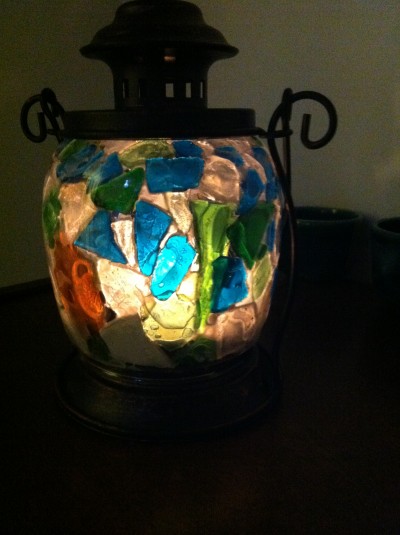